We Are Open (Call or Email) 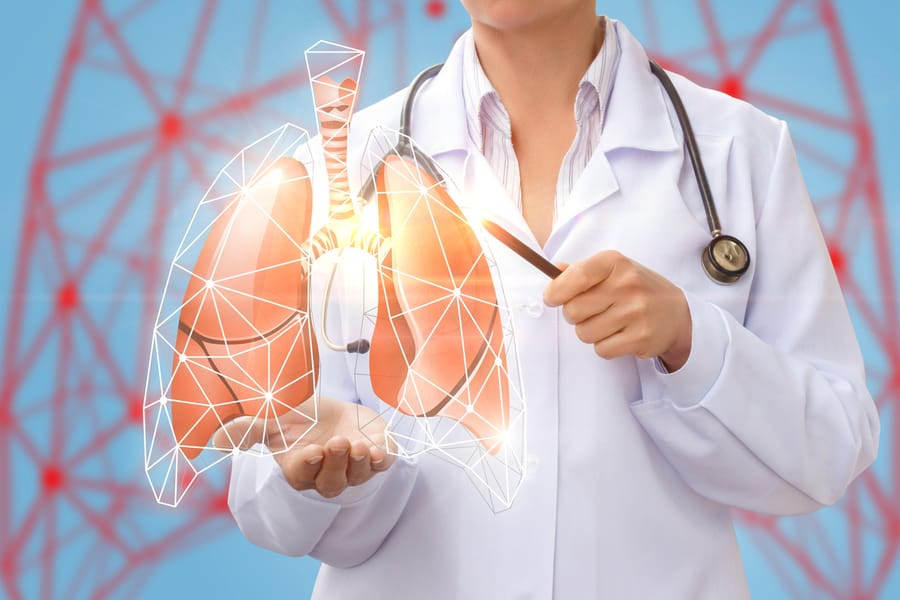 Non-invasive SBRT radiation for early stage lung cancers can be a curative alternative to surgical resection.

Stereotactic Body Radiation Therapy (SBRT) in treating early-stage non-small cell lung cancers (NSCLC) can be considered a safe and effective alternative treatment to surgical resection especially for patients deemed inoperable according to the study reports presented by American Society for Radiation Oncology (ASTRO).  Recent studies indicate that for otherwise healthy patients with operable early stage lung cancer, SBRT may be an acceptable alternative to surgery and may even have a survival advantage.

Traditionally, surgical treatments like lobectomy or pneumonectomy are recommended for early-stage lung cancer resulting in 3-5 year survival rates of 60-80%.  Conventionally Fractionated Radiotherapy (CFRT) is also not as effective with respect to 3-year or 5-year survival rates providing a strong rationale for surgical resection.

The use of SBRT in treating early stage-lung cancer has grown rapidly in the last decade as its outcomes are nearly as good as surgical resections in high-risk lung cancer patients. The advanced SBRT radiation demands highly sophisticated treatment planning to deliver precisely higher doses of radiation leaving the surrounding critical tissues and structures unharmed.

Studies reveal a clear dose-response relationship for tumor control with escalated doses in SBRT. This high-precision radiation delivery contributes to treatment effectiveness for patients with lung tumors.   It is important that your radiation oncology physician has special expertise in SBRT planning and treatment delivery.

SBRT provides a viable alternative to surgery mainly for the following:

The American Society for Radiation Oncology (ASTRO) has introduced a new set of evidence-based guidelines in administering SBRT in early stage NSCLC patients. Its main objective is to address lung cancer patients deemed inoperable but require customized SBRT in high-risk clinical scenarios like:

Special guidelines are also recommended to treat centrally located tumors which carry high-risk compared to the peripheral ones. These also focus on the appropriateness of SBRT application in operable patients, an area of debate and controversy.

[ A ] A past analysis of early stage NSCLC patients deemed unfit for lobectomy revealed no pronounced difference in treatment outcomes between SBRT and wedge resection.

[ B ] A similar finding was observed in a propensity-matched study with stage 1 patients. 462 of them underwent surgery and 76 were treated with SBRT. Both the groups showed similar rates of local recurrence and disease-specific survival and the 4-year local control was 90%.[ii]

[ C ] A retrospective analysis by Japanese investigators with 87 Stage 1 patients who refused surgery and were treated with SBRT showed following results:

[ E ] In another recent study, SBRT has been found to be effective even in elderly patients (≥80 years of age) resulting in better local control and minimum toxicity.

However, several randomized studies comparing the benefits of SBRT and surgery could not be completed because of poor accrual.

Possible improvement in the quality of life and pulmonary function post SBRT:

Is SBRT appropriate for all patients with early-stage lung cancer?

Not all patients can be given SBRT but very few can be excluded.

Today, a large body of evidence supports the use of SBRT in treating early stage NSCLC but decisions in optimal choice of treatments should be made by a multidisciplinary team after a careful analysis of all possible outcomes.

How does COVID-19 spread?

The virus can spread easily, just like the common cold or flu. It spreads when an infected person coughs or sneezes droplets that can get into the eyes, nose, or mouth of people nearby. Droplets also land on surfaces that people touch before touching their own eyes, nose, or mouth.

How can I protect myself?

These are some of the best ways to protect yourself and others from the virus:

What should I do if I have cancer?

Some people with cancer might have a higher risk of getting COVID-19 or having a serious infection from it. Do your best to follow the steps listed above to protect yourself. Ask your doctor or nurse if they have special recommendations based on your health or type of treatment.

Call your doctor right away if any of these happen to you:

Should I wear a mask?

It is recommended to wear a mask in pubic at all times. Please wear a mask at all times while at Beverly Hills Cancer Center as well. This can help prevent the spread of the virus, and protect both you and those around you.

What if I care for or live with a cancer patient?

If you are caring for or living with someone with cancer, do your best to keep them from getting the virus. Follow the steps to protect yourself listed on this sheet.

If you become sick yourself, call your doctor to see what more you should do to protect your loved one.

What about people visiting?

If you are sick or have been exposed to COVID-19, we ask that you not come to Beverly Hills Cancer Center. We ask that you find someone who isn’t sick to join your loved one at their appointments.

To protect all patients, we may limit the number of people who can visit someone staying in the hospital. Please check with your care team.

Our Facility is taking steps to keep patients separate from those who may be at risk. At every appointment, your care team will ask questions about overall health and recent travel. Patients and anyone entering the center will have their temperature checked upon arrival, and will be asked to wear a mask. Visitors are limited if they are not actual patients, including family members, and translation services are also being conducted by phone or video instead of in person. Staff members are wearing increased protective equipment. We may ask some patients to wait in a separate room or to reschedule until they are feeling better if they have any symptoms. Everyone must respect social distancing protocols wherever possible including in the waiting room, infusion area and clinic.

We are also taking extra steps to clean and disinfect surfaces throughout our Facility between each patient, and deeper cleaning each evening.

Will you still care for me if I get sick?

Yes. Your care is our top priority. Although we may change some ways we care for you, we will never put your care or health at risk.

Is there care available for International Patients?

For international patients, we are here for you each step of the way. We have resources for private travel arrangements, including private jet, private car transfers from airport, and relationships with local housing and hotel options with the top safety and cleanliness precautions.

Your health is important, and we welcome the opportunity to help you heal.

To schedule an appointment, please call Beverly Hills Cancer Center in Beverly Hills, California at (877) 320-5131 or Click the link below to access our Online Appointment Request